Corfu is the northernmost region of Greece, literally and metaphorically as it did not follow the course of the history of the rest of Greece for many centuries. The island was linked to the history and the culture of other countries but preserve its genuine Greek charm. The hotel reception is always happy to provide all the information you need in order to discover the authenticity of Corfu as a real traveler. Feel free to ask anything.

We will be happy to share with you everything we know as locals. Even if there is something we do not know, be sure that we will find out and help you discover the authentic aspect of Corfu and experience unforgettable days and nights on it! We have prepared a nice start for your tour around the town and the countryside.

The whole Old Town of Corfu, a UNESCO World Heritage site, abounds with places of culture. Make a stop at the building of the Philharmonic Society of Corfu (Palea) (a brass band), established by the composer of the National Greek anthem, and at the Casa Parlante Museum, right next to it, a revival of the life in a Corfiot noble mansion of the previous centuries.
Pay a visit to the Reading Society, the oldest intellectual institution of modern Greece, the Museum of Asian Art with a collection which is unique in Europe. A visit to the nearbyMunicipal Gallery of Corfu is a must as it features the works of Corfiot artists, renowned all over Europe. The Archaeological Museum, recently renovated, is another must-see during your tour. It showcases the history of Corfu through the important archaeological findings.

It is situated in Vraila-Armenistreet which leads to one of the most beautiful seafront promenades in the Mediterranean.
The only way to experience Corfu is to wander lazily through the Old Town. The crooked narrow lanes with the multi-storied buildings, the picturesque squares, the little shops, the colours, the roof tiles, the local people with the signing venetian accent, all together look like a vibrant Mediterranean scenery.
This fascinating town is protected by two vast and strong Fortresses, the Old Fortress and the New Fortress* which were constructed by Venetian masters of fortification art and are accessible to the visitors. Before you visit the New Fortress, consult its opening hours. 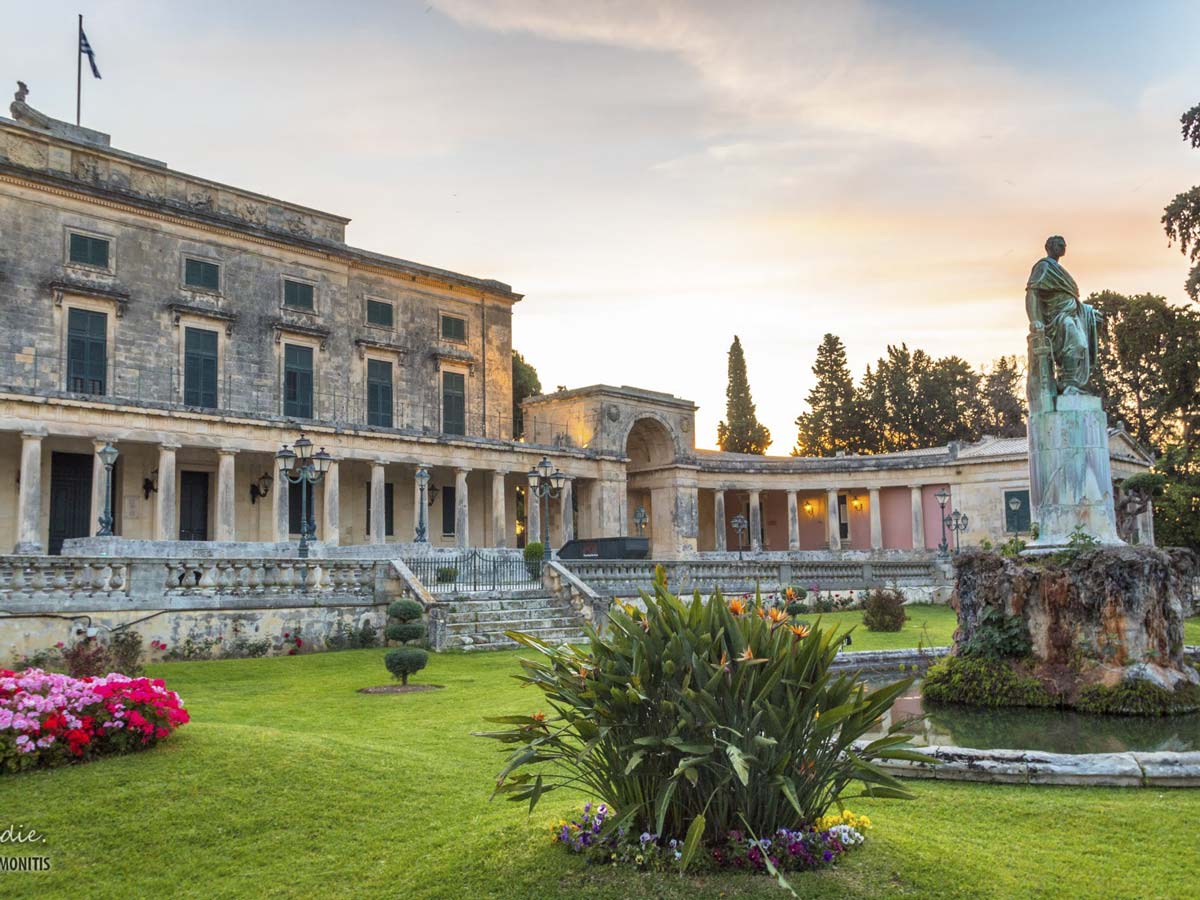 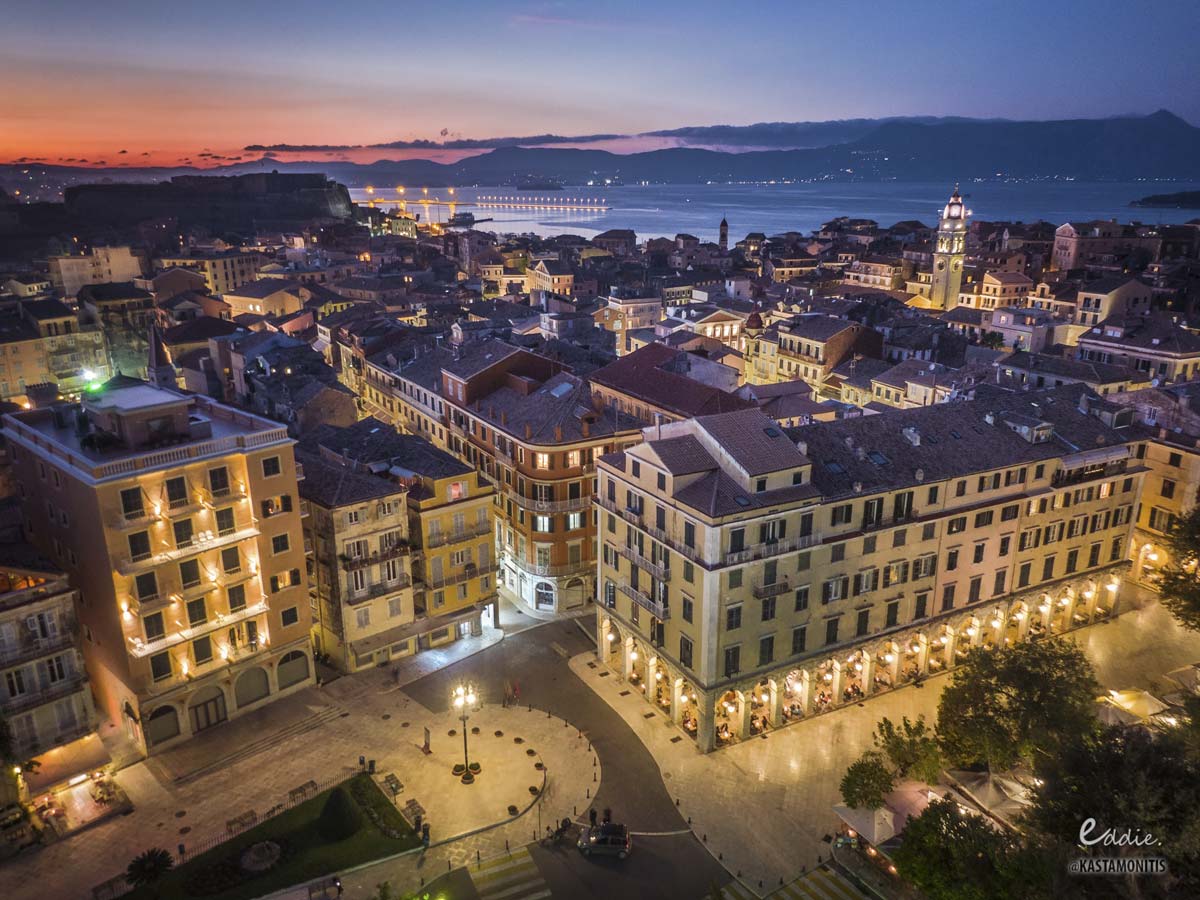 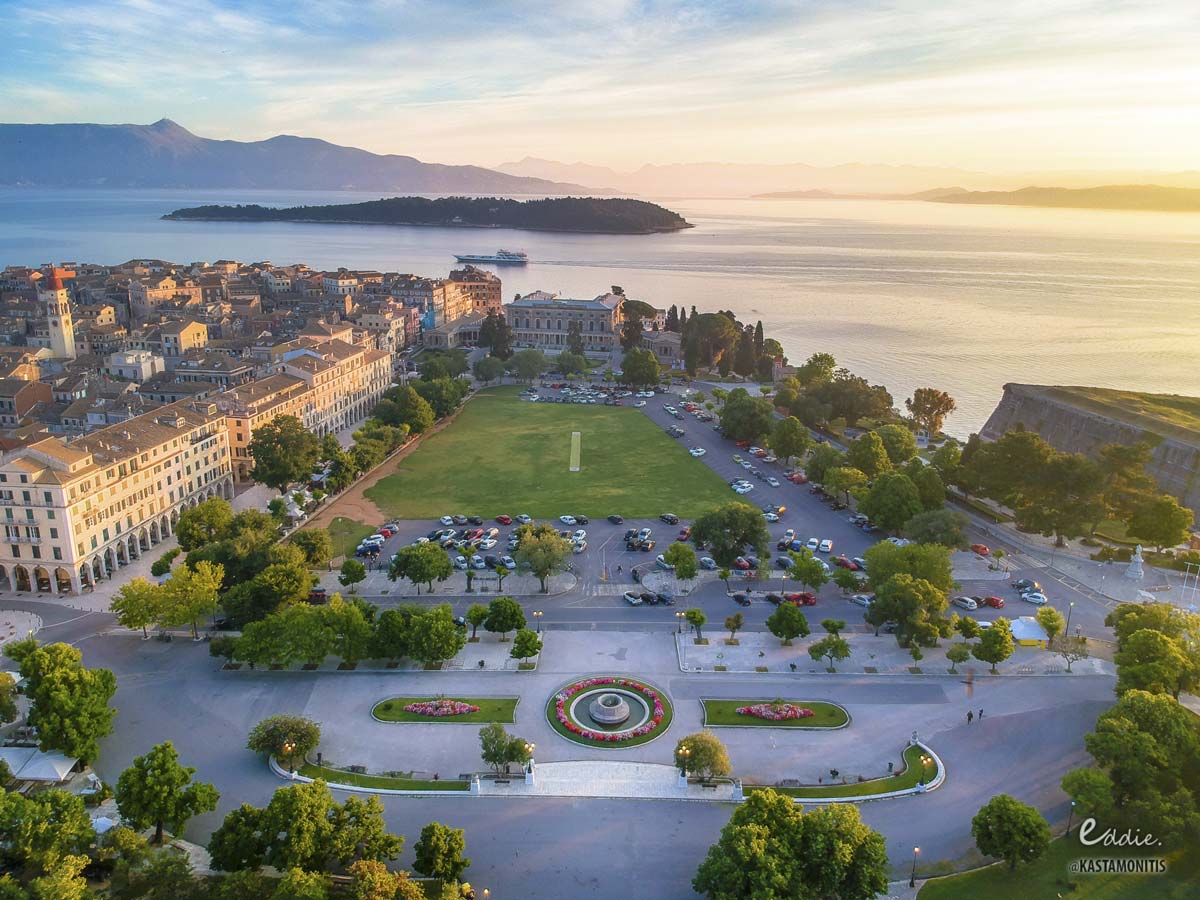 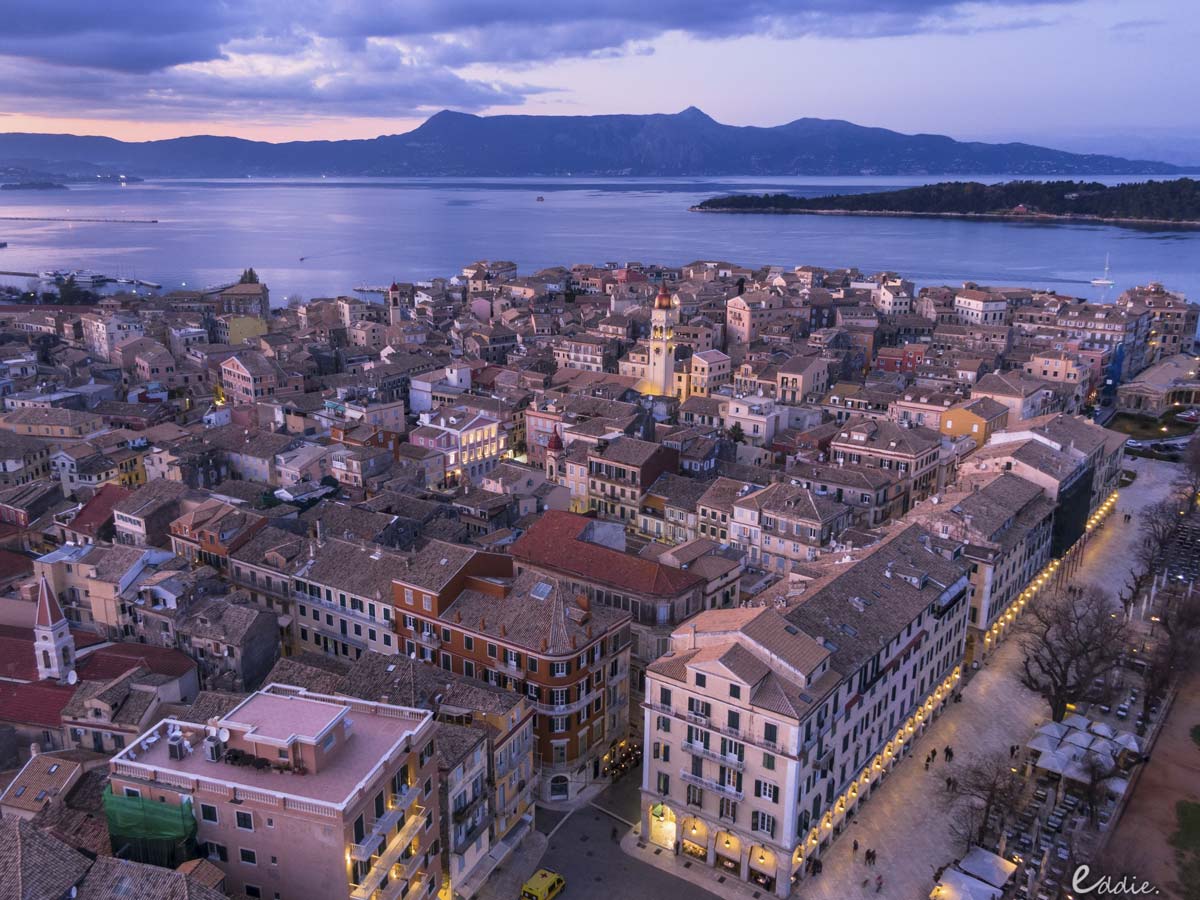 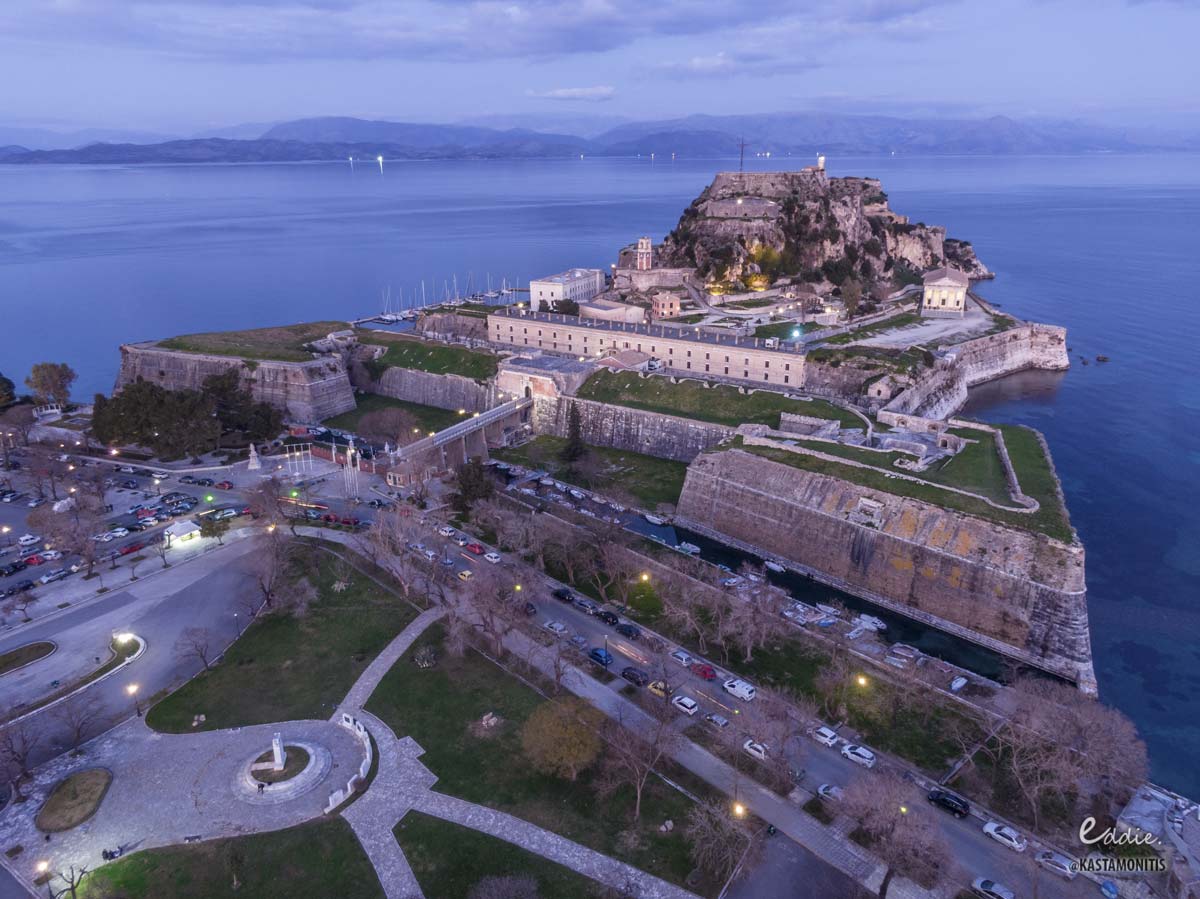 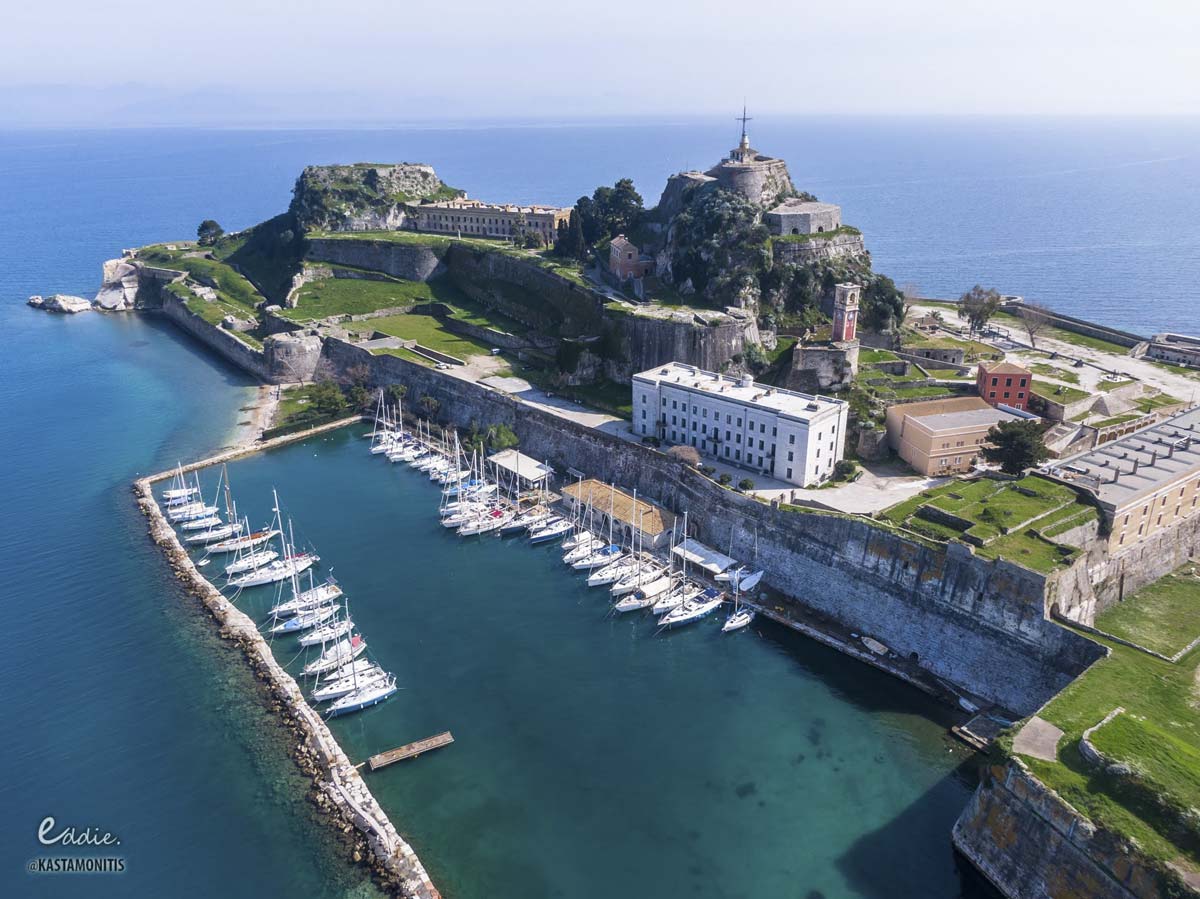 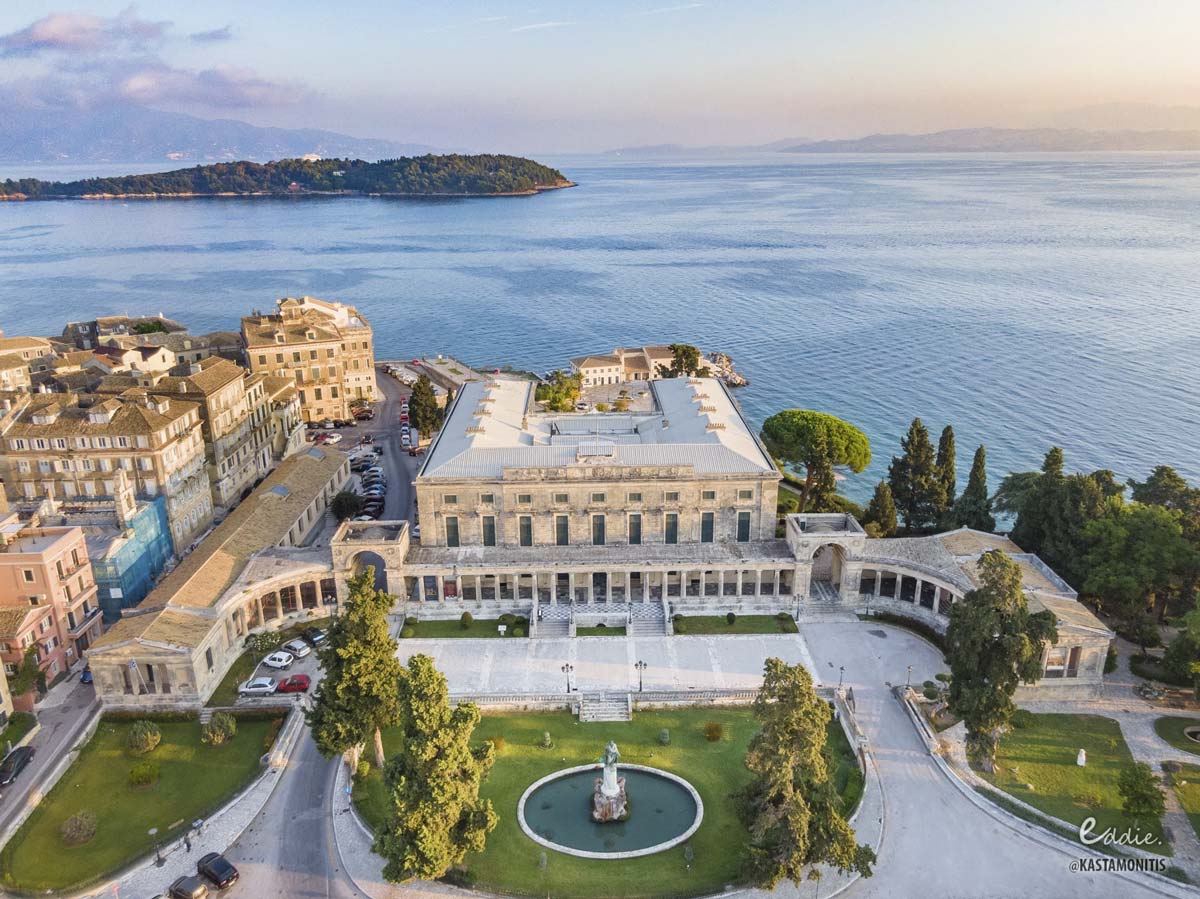 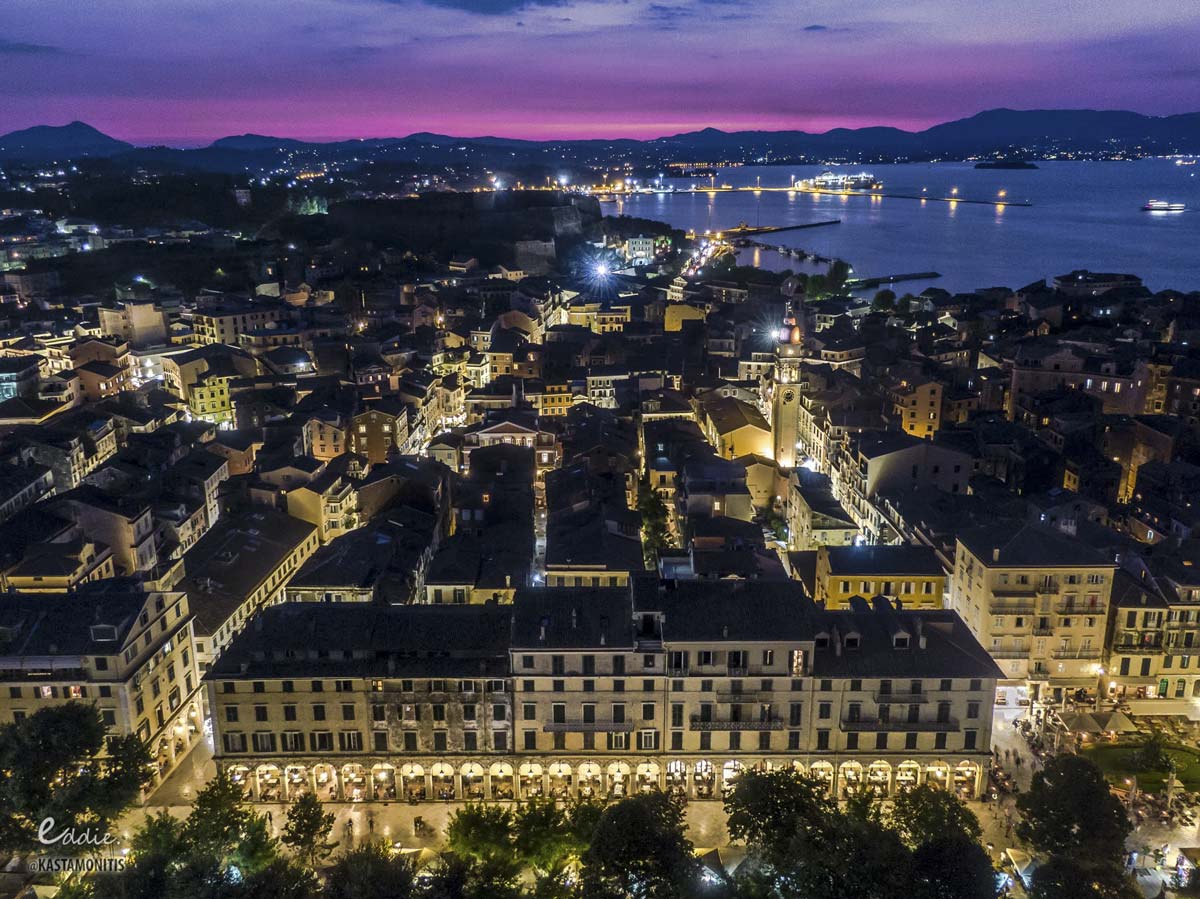 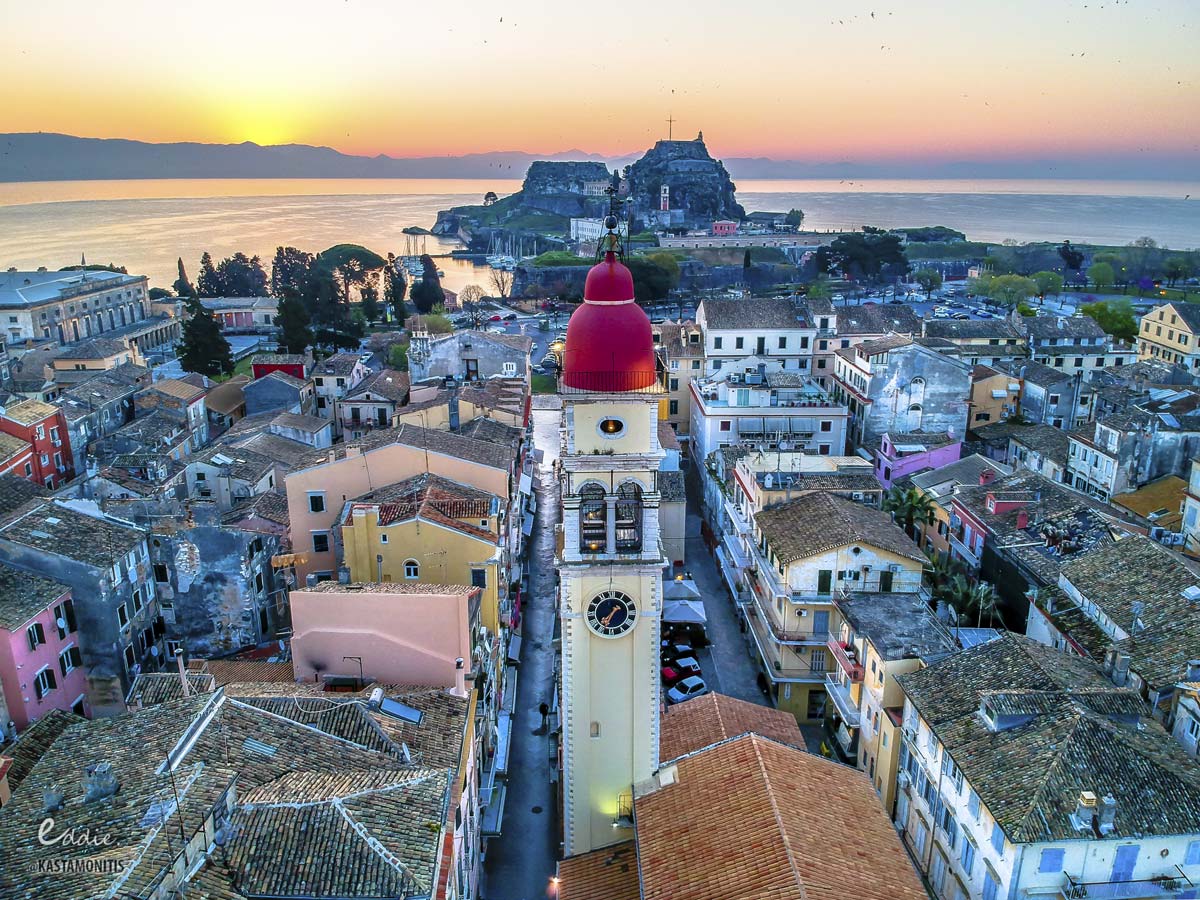 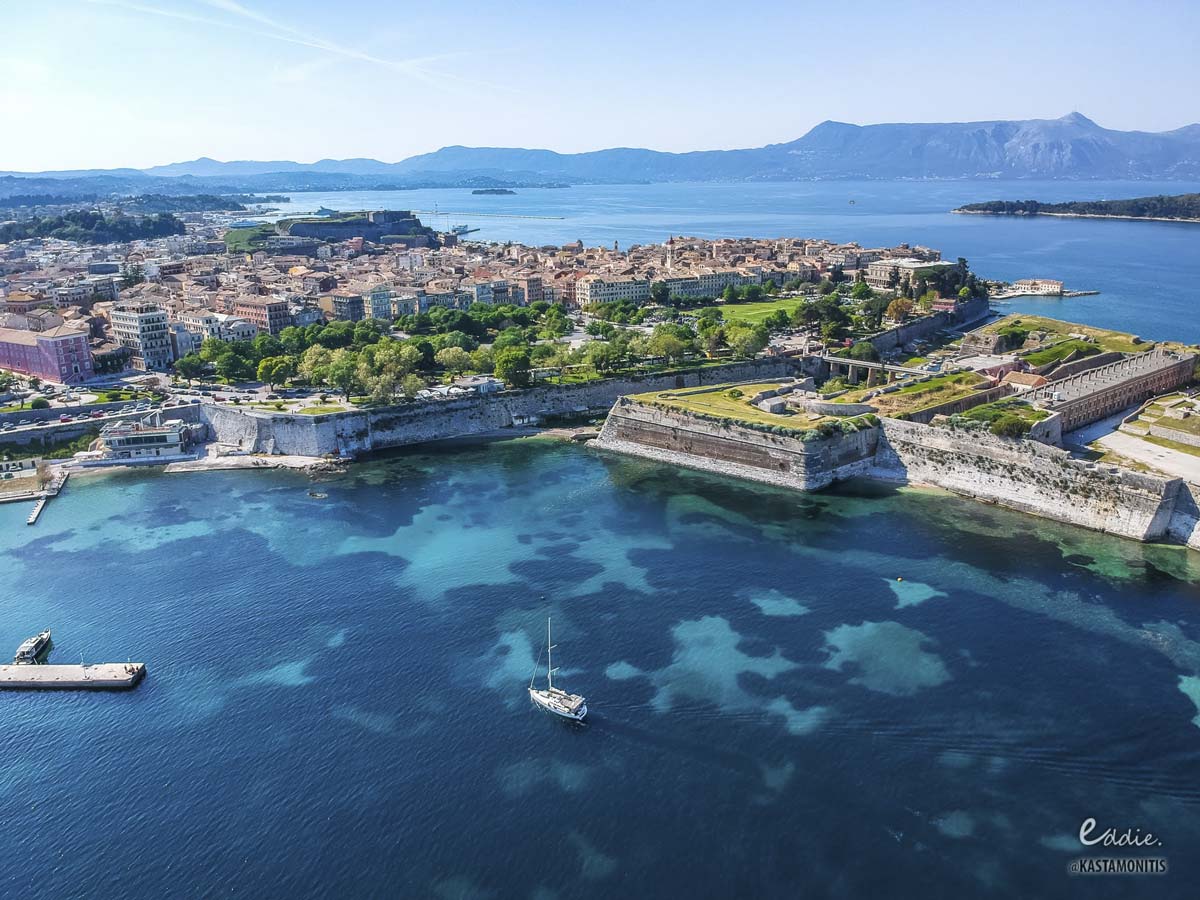 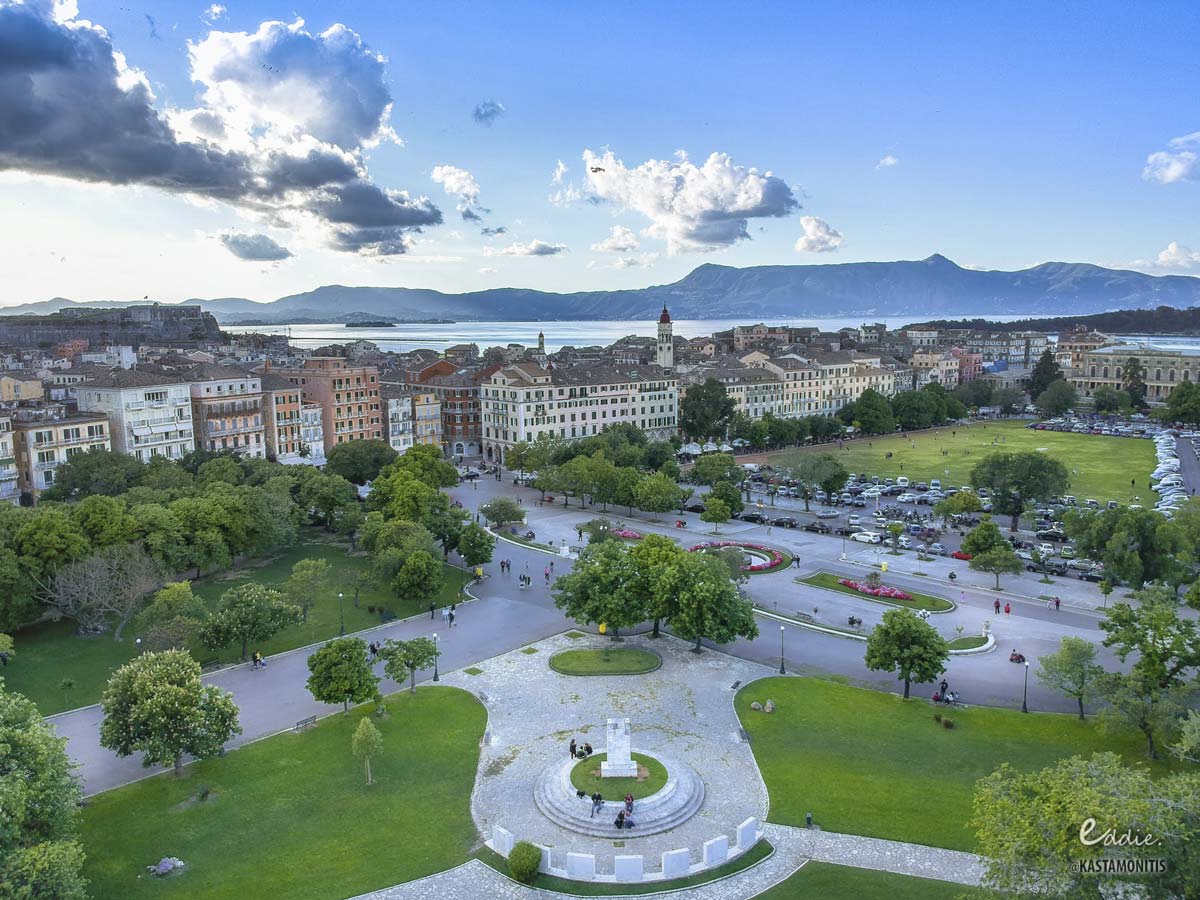 Sightseeing in the countryside

The Achilleion palace, built by the Empress Sissy of Austria is the most important monument in the beautiful village of Gastouri.
In the area of Korakiana, at the proximity of La Maison Boutique Hotel, you can visit the Corfu branch of the National Gallery feauturing works of major internationally renowned artists. Among these, you may admire the painting “Crucifixion” of El Greco’s workshop.
At the north of the island, the castle of Kassiopi has a dominant position while the castle of Aggelokastro overlooks Paleokastritsa.
The Capodistrias Museum, in the village of Evropouli, is a modern though small museum dedicated to the first Governor of modern Greece, a great politician renowned all over Europe, originated from Corfu.

Whichever attraction to choose to visit, do not leave out a visit to the nearby villages. It is the most authentic way to experience the Corfiot county life. If you walk past a bakery, buy some bread, if you run into a coffee-shop, have a seat and enjoy a cup of coffee and, possibly, a nice chat with some local who has many things to tell you about his place.
Apart from the villages, take some time to wander through the endless Corfiot olive-groves. The vast areas with the tree figures creating the impression of dancing in the nature will fascinate you.
Please note:Watch out for snakes. Always wear shoes when walking in the countryside. One more thing: if you are allergic to insect bites and bee stings, be sure to have a serum in your bag as the closest Health centre may be quite far from the villages.

What is Greece without sun, sand and sea?
Corfu offers dozens of beautiful beaches, each one of an exceptional beauty.
Beaches with sand, with pebbles and rocks and tree-covered slopes which often plunge down in the green and blue waters.
The beaches on Corfu are not just beautiful. They are surrounded by a wonderful landscape and lush greenery; often enough, the routes leading to the beaches are also very interesting. In Corfu, there is always another beach for you to discover, however we will recommend some of our favorite ones. They are all situated no more than 20 klm from La Maison Boutique Hotel.
The sandy beach of Glyfada is a large, very popular beach with a number of beach bars and well organized.
Rovinia is a hidden paradise, accessed by walking downhill; however, as soon as you get there, the scenery will compensate you. The turquoise waters, the landscape and the serenity are hard to forget.

Barbati is a rather crowded beach with white pebbles and crystalline waters. There are many beach bars and restaurants to choose from and will all satisfy you. However, you are advised to reach the beach before noon if you want to get a sunbed.
Avlaki, still pure and intact from human intervention is another beach with white pebbles, crystalline waters and no facilities, a reason to be preferred by many.

Finally, Ipsos, just 100 me from La Maison Boutique Hotel is a well-organised beach, easily accessible, with clear waters and a sandy shallow beach with some pebbles. Ipsos is one of the most popular beaches on the island with a large number of restaurants, bars and coffee-shops. There is also a water-sports school offering special rates to the guests of La Maison Boutique Hotel. 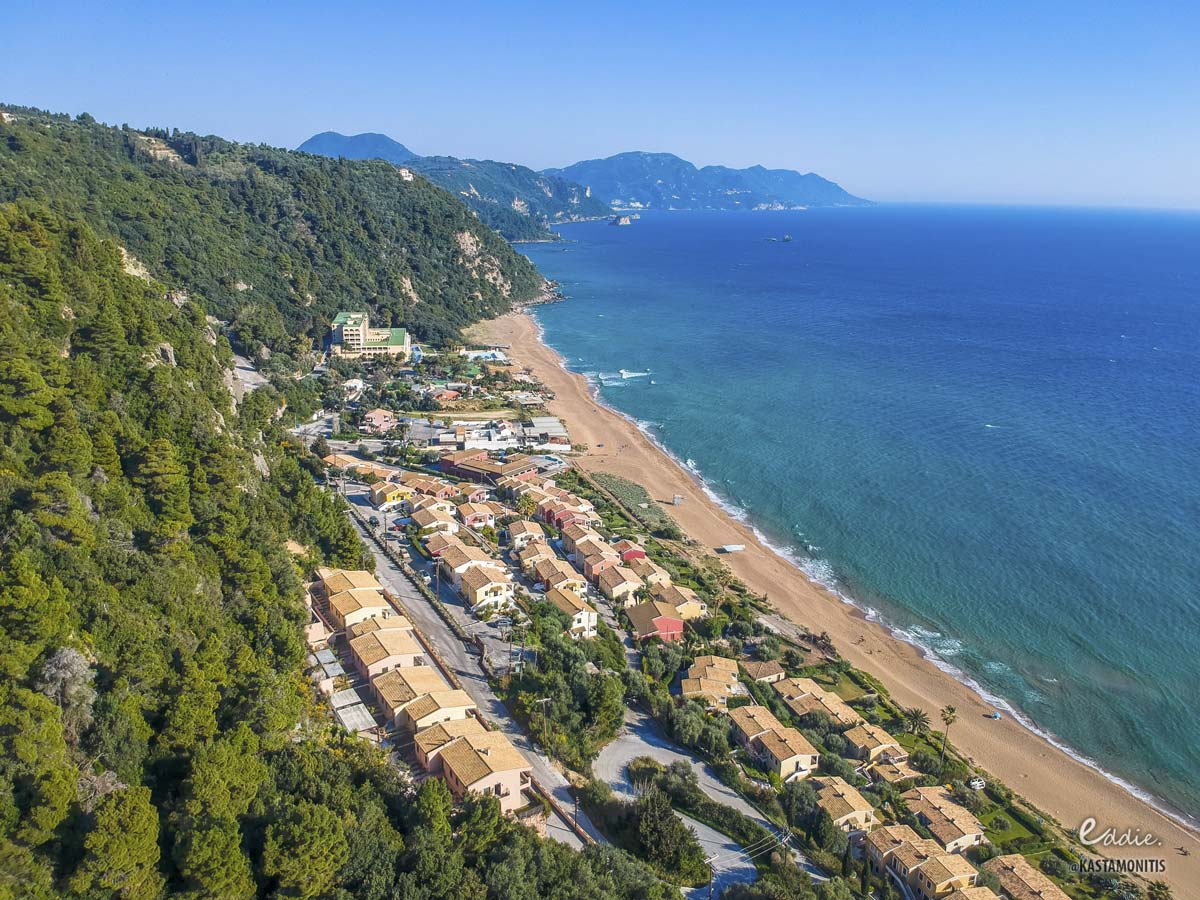 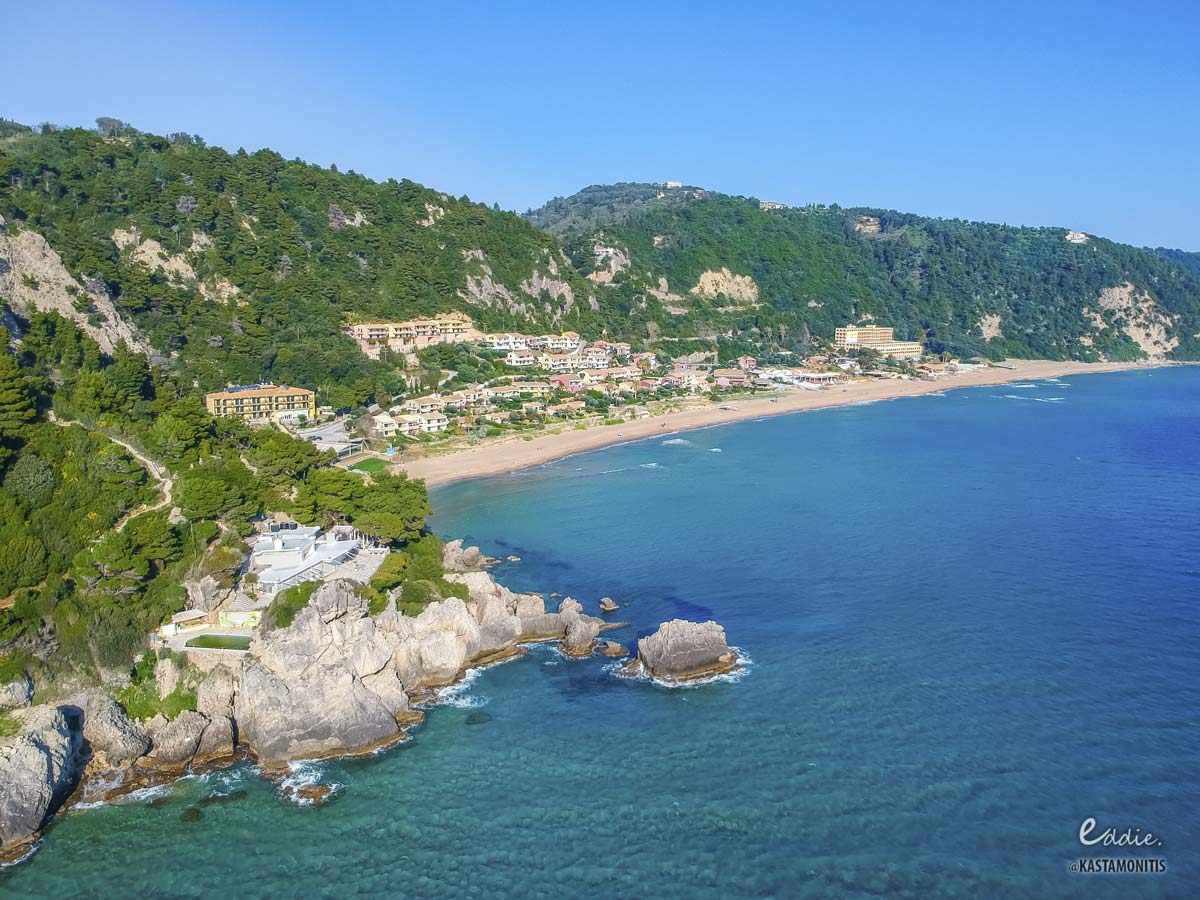 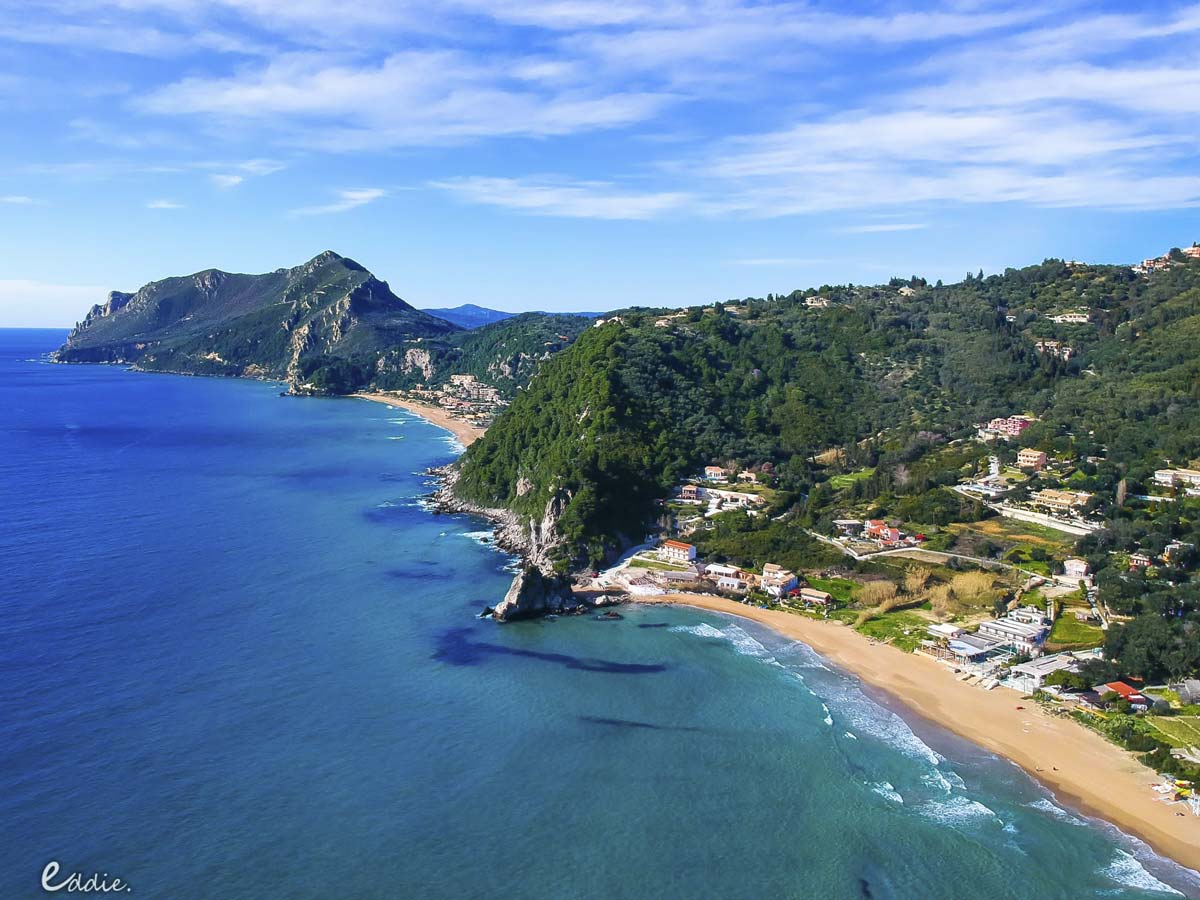 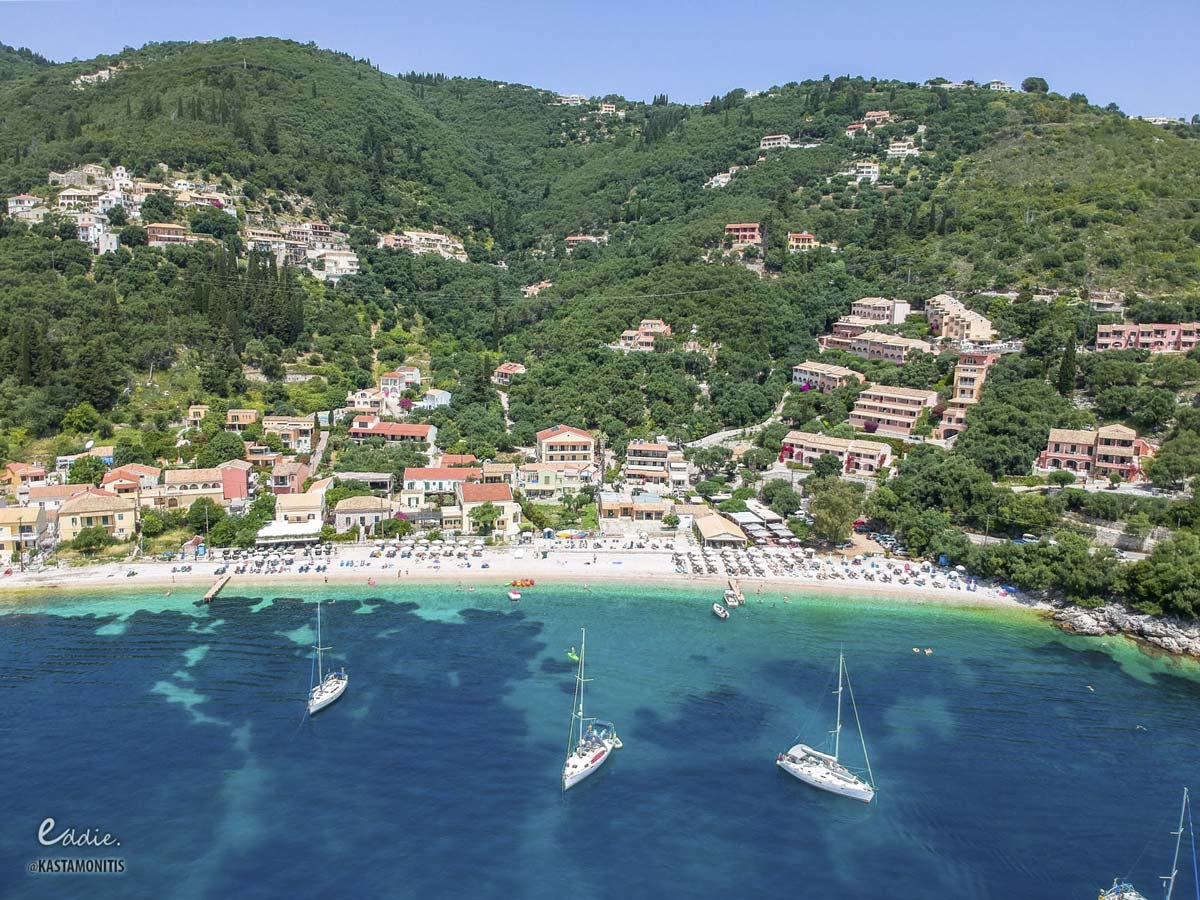 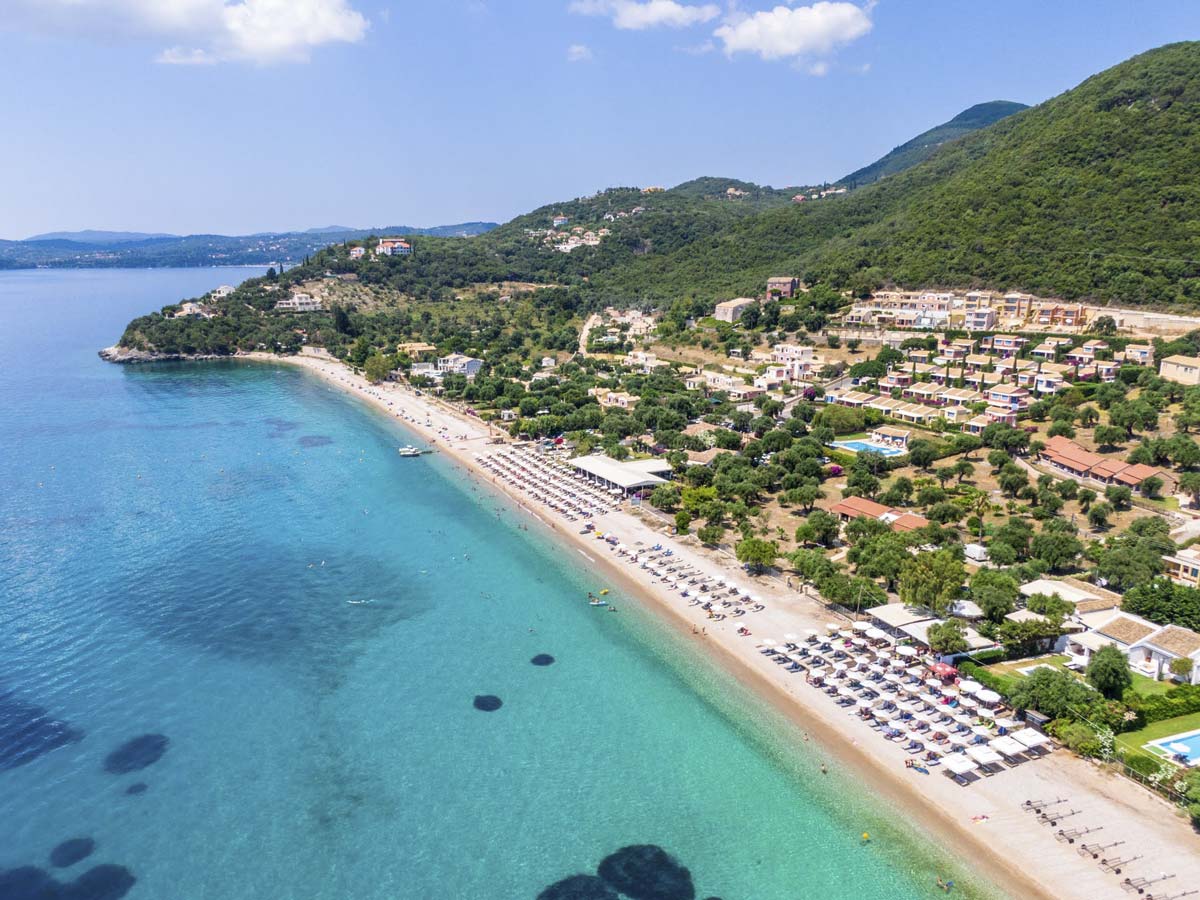 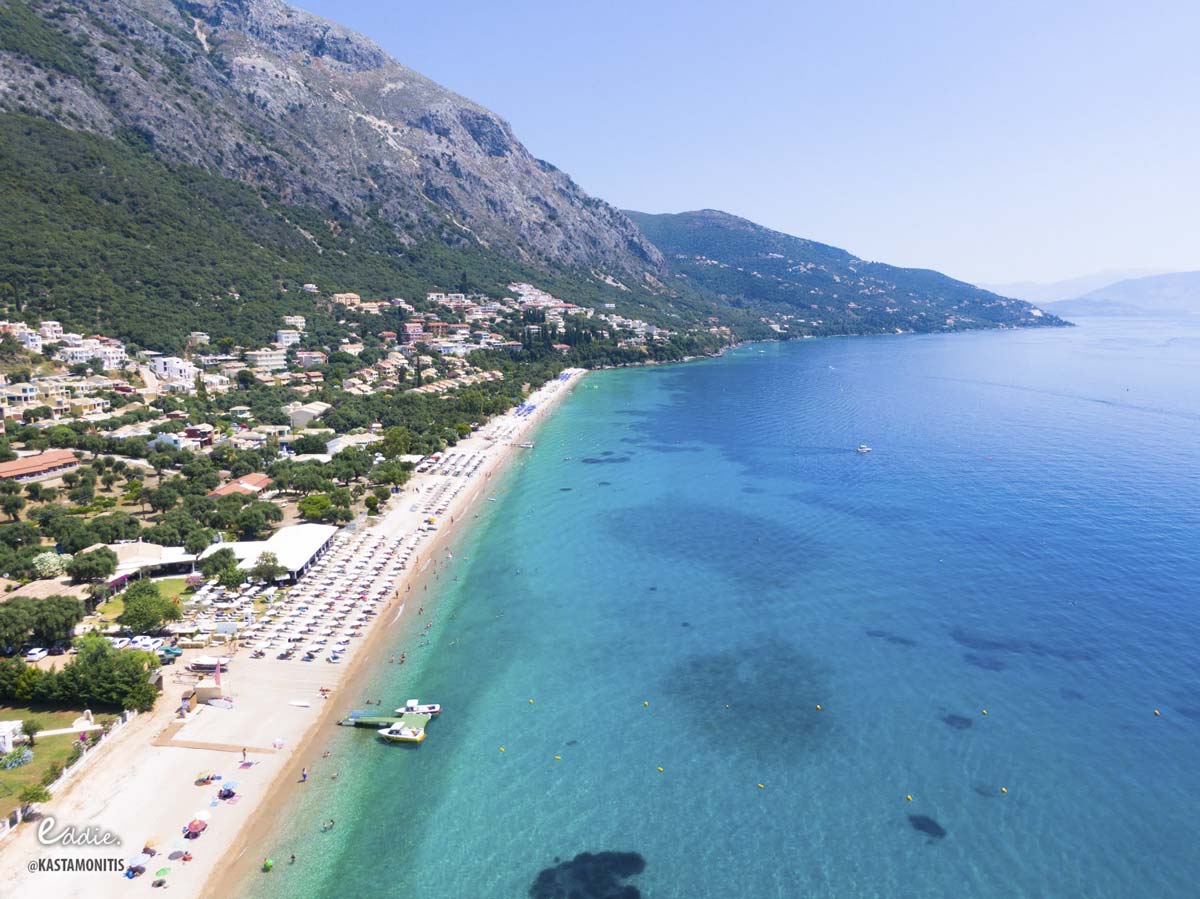 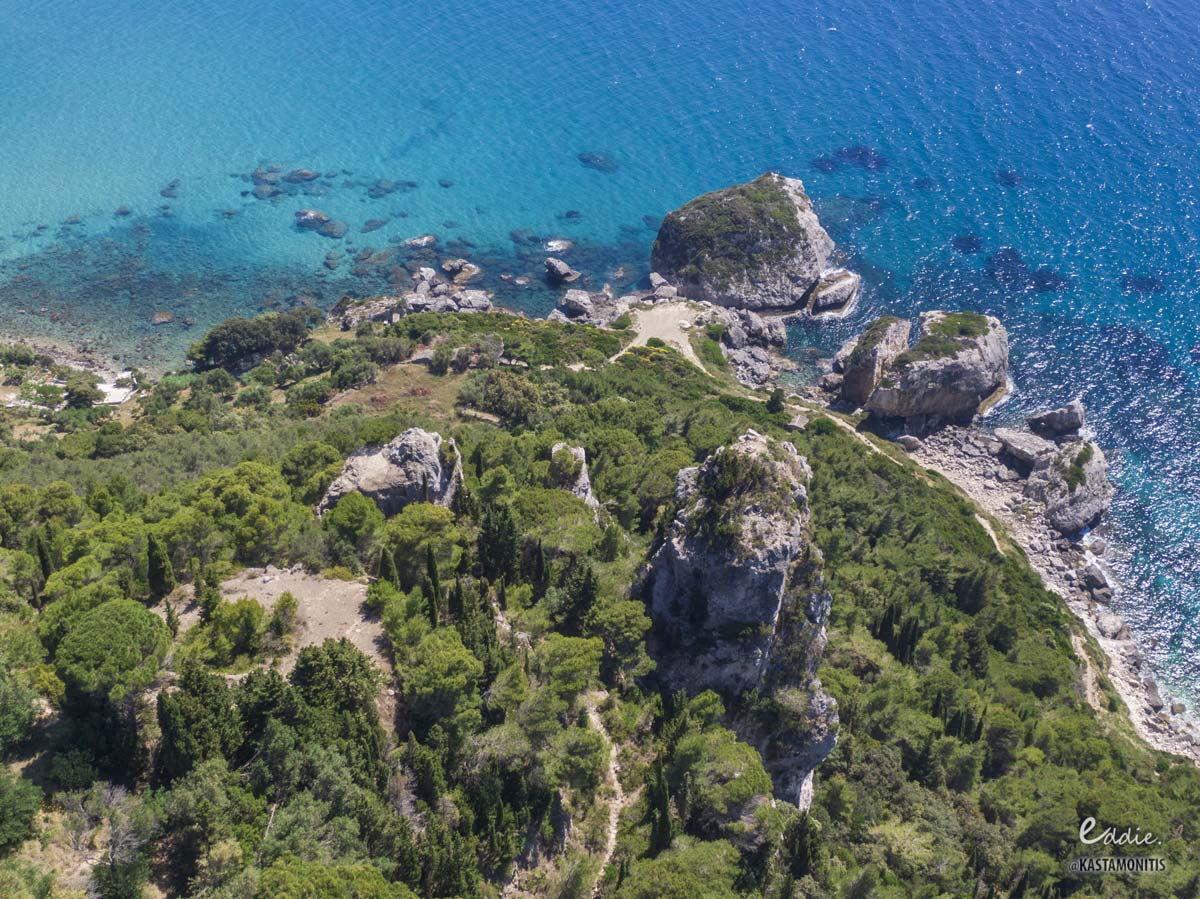 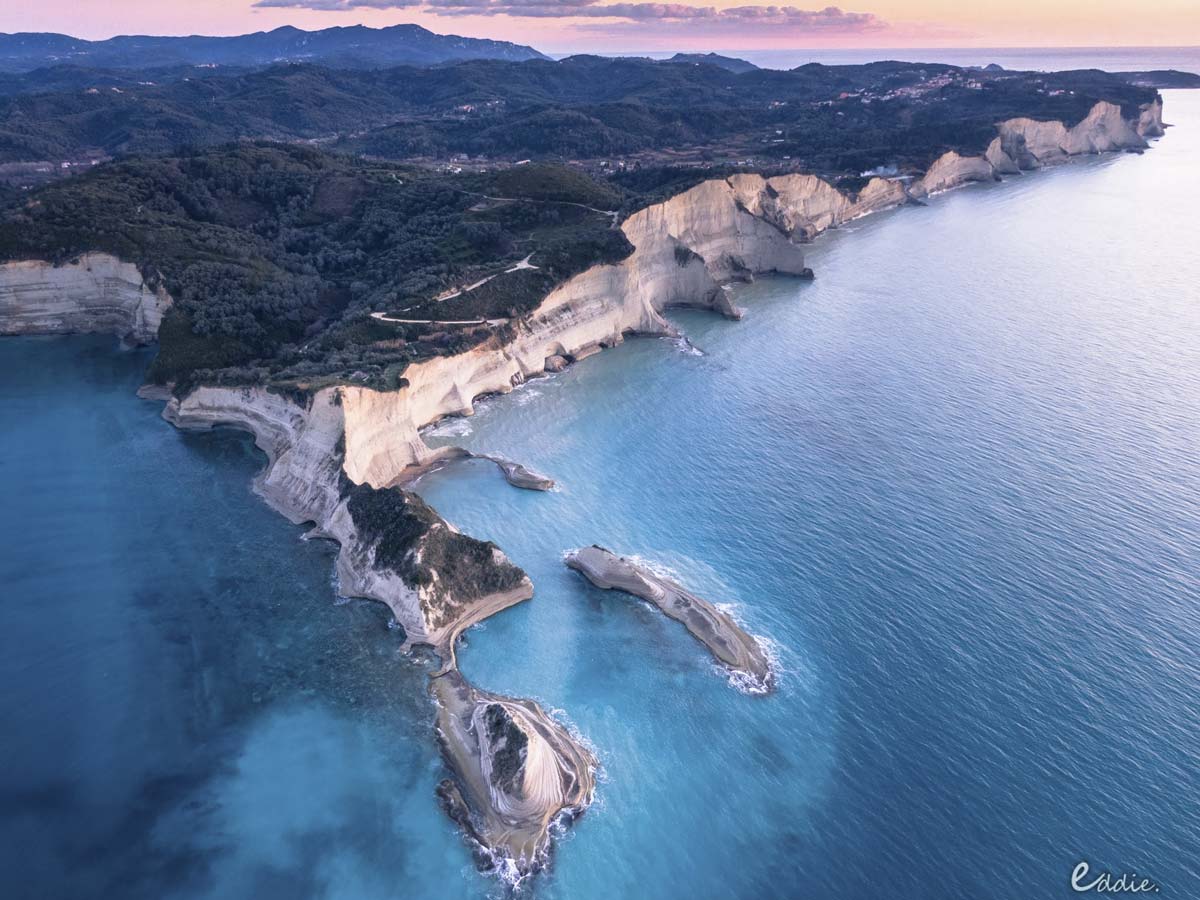 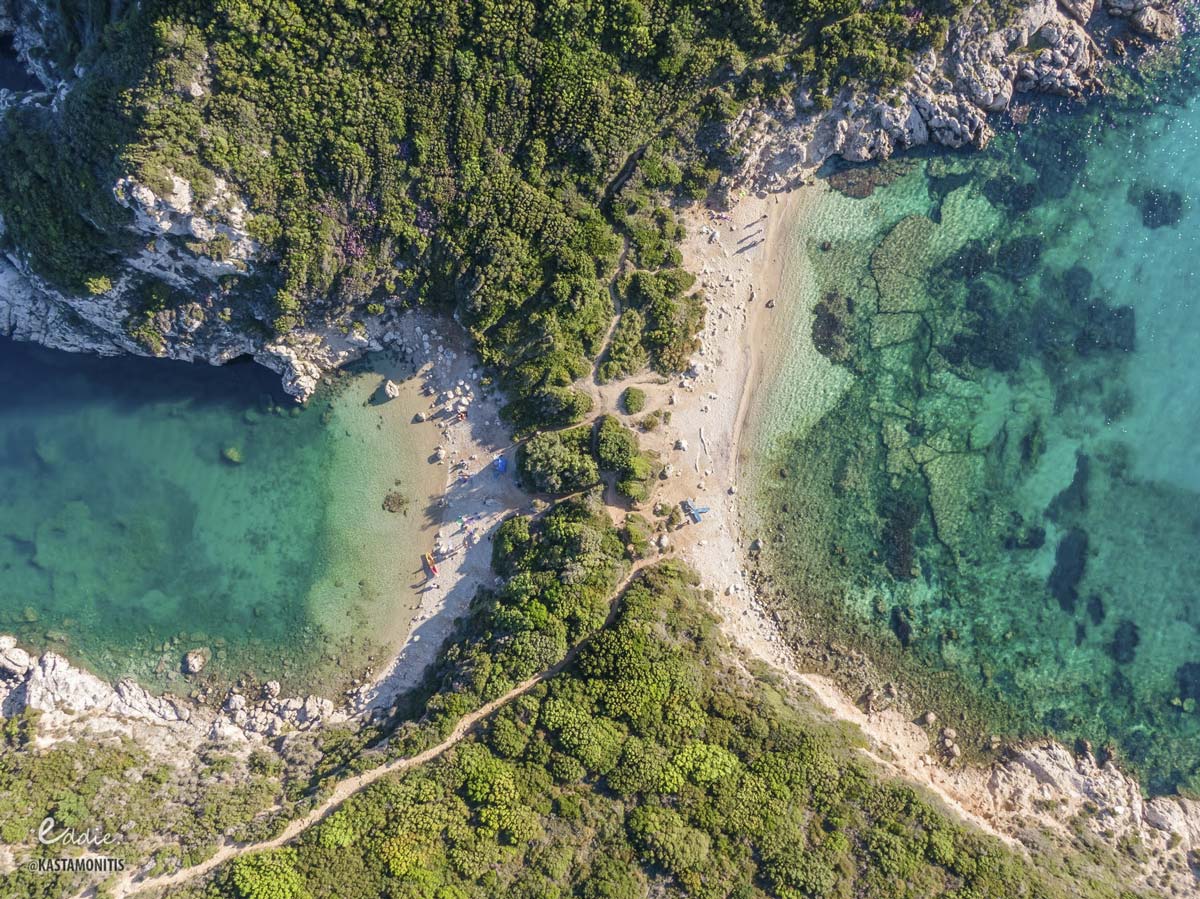 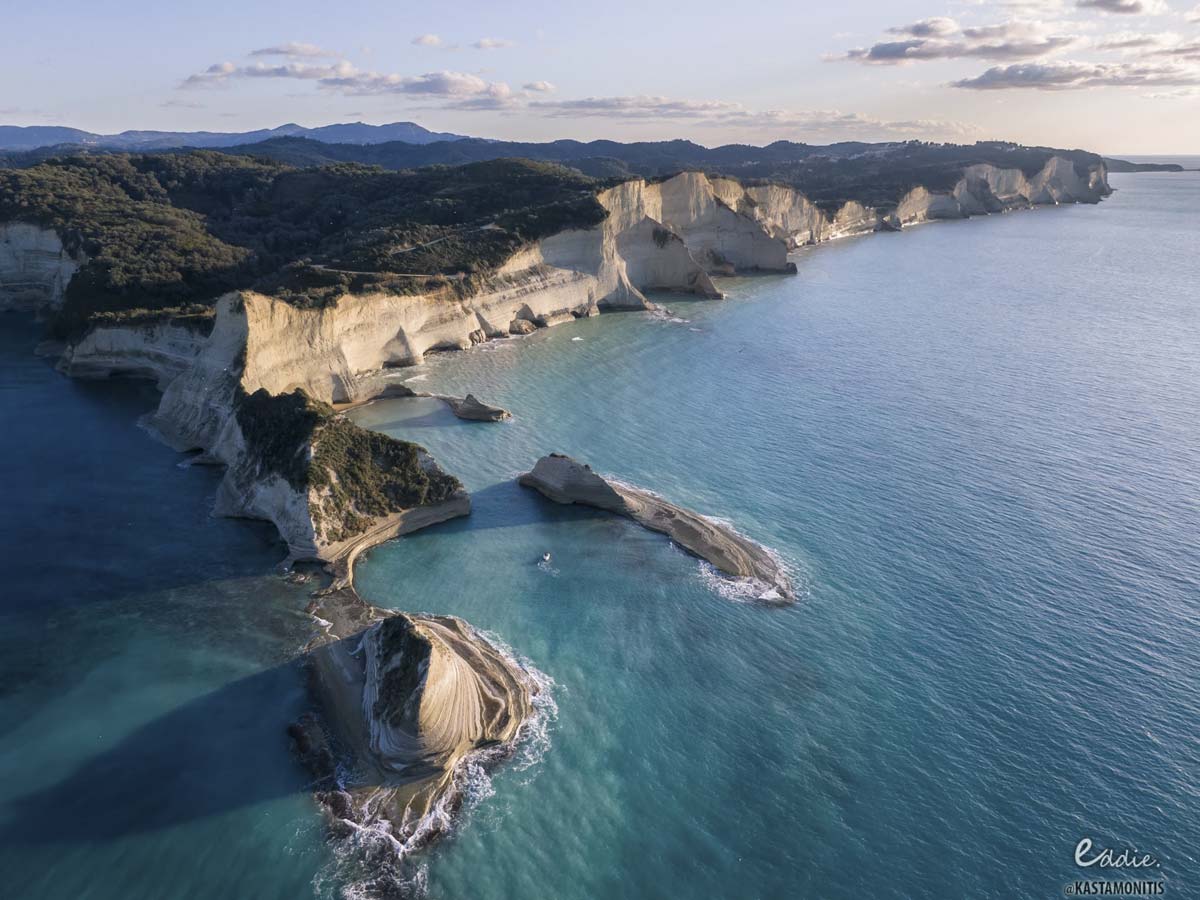 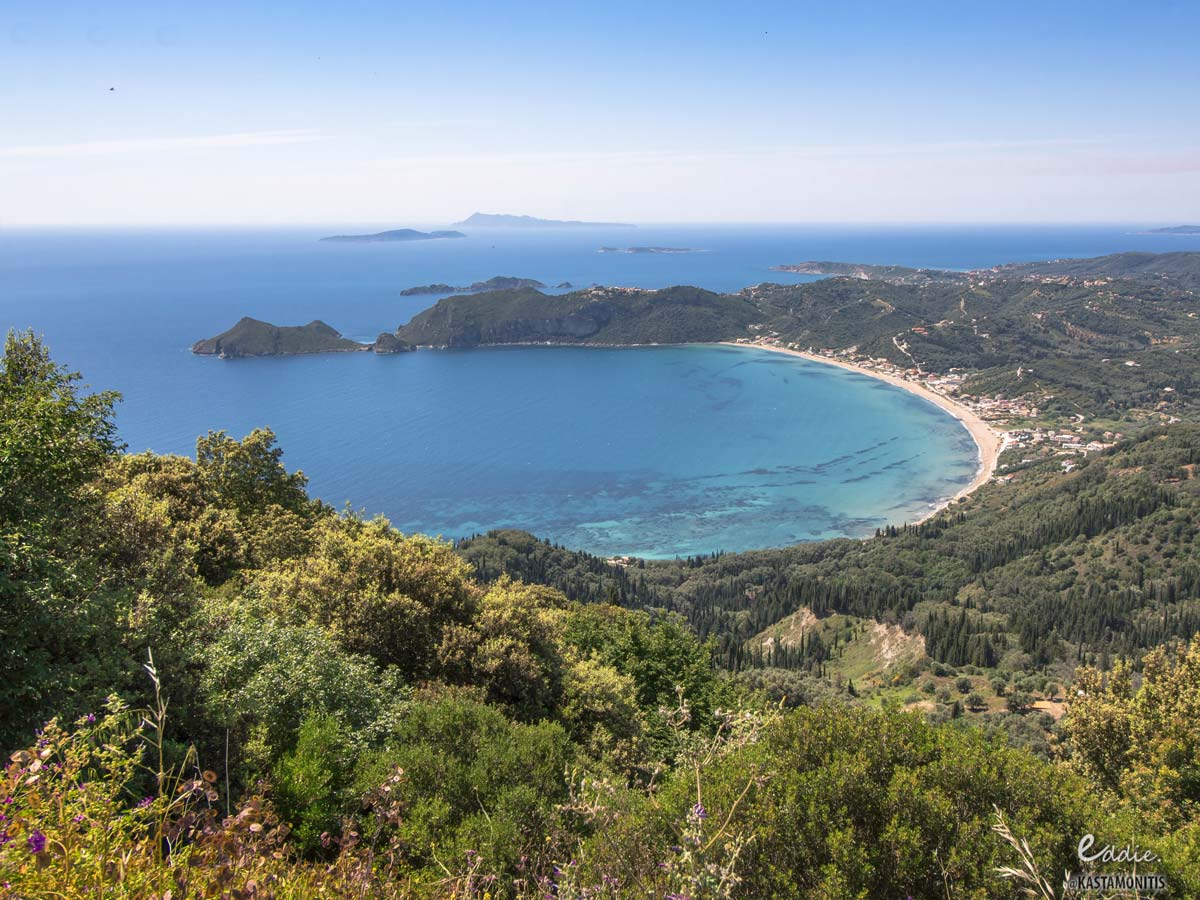 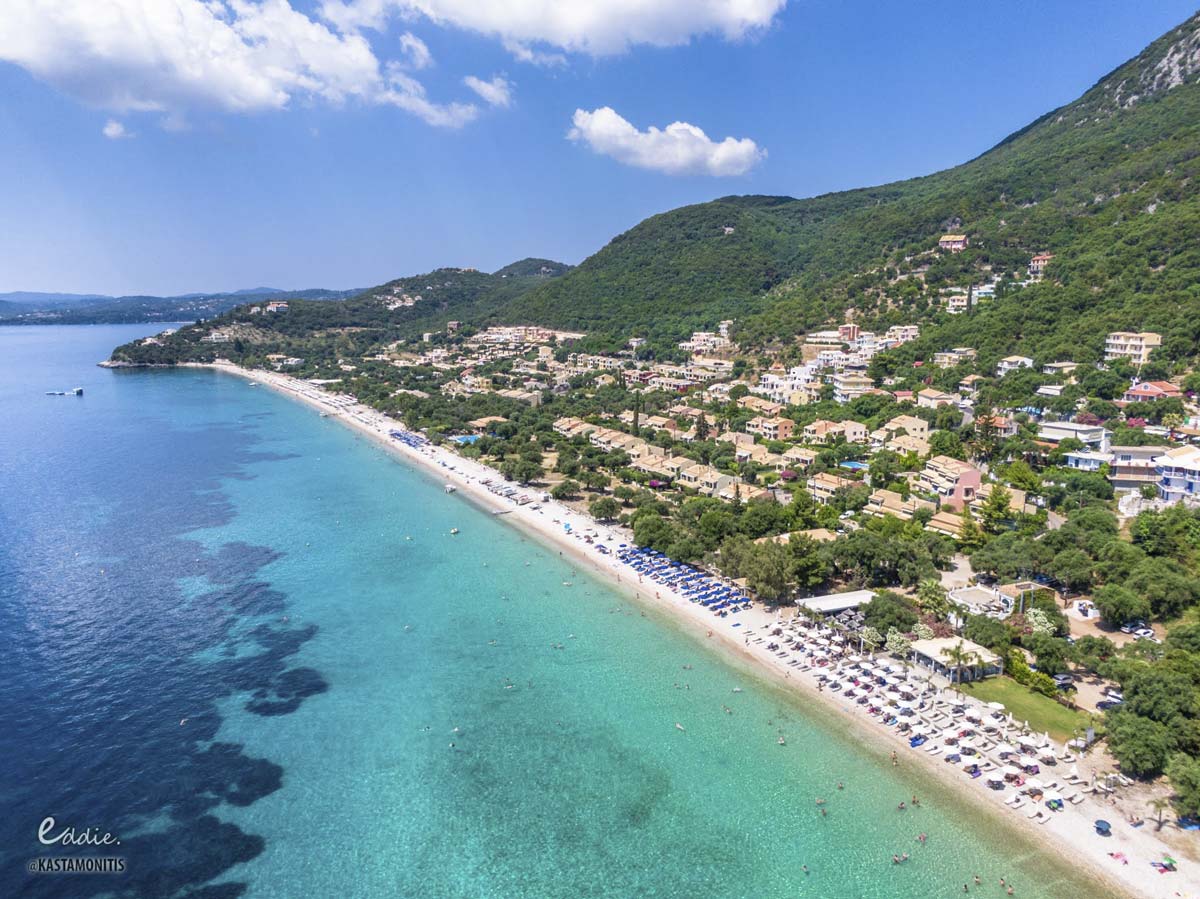 A little hint of history and culture

The population of Corfu is approximately 110,000 people while its total area is 610.9 km2. The island has a large port, an international airport and a dense road network accessing all the traditional communities and villages. The town in the centre of the island is the capital with a population of 28,000 people while the “Old Town of Corfu” is a UNESCO World Heritage site.

In the antique times, Corfu was the island of the Phaeacians, the last stop of Odysseus before getting back to his homeland. Hospitable ever since the Homeric times, the island has never lost its characterover the course of 28 centuries of history. In modern times, Corfu was the leader of Greek tourism with the opening of two major tourist complexes. One of them, the famous Club Mediterrannée, was located at the area close to La Maison Boutique Hotel.

After the antique times, the island went through the Roman and the Byzantine era; after a series of attacks and conquests by various European tribes, it passed under the control of Venice by virtue of a Peace Treaty in 1386. The Republic of Venice had the greatest influence on the culture and the character of the islands than any other conqueror.

The Fortresses, the urban architecture and street planning, the cuisine and the language, all reflect elements of the Venetian culture. Walking around the Old Town of Corfu will remind you of Venice and, on many occasions, you will discover a stone-made sculpture of the Lion of Saint Mark, the symbol of Venice. After all, La Maison the Boutique Hotel is600m. from the traditional village named Agios Markos (Saint Mark). This strong influence is absolutely natural since Corfu was under the control of Venice for 411 years!

Then, Corfu was ceded to Napoleonic France, later it was occupied by the Russians replaced again by the French and, finally, became a protectorate of the United Kingdom for half a century. During all these historic milestones which marked the character of the town and of the island, the locals preserved their Greek language and the Orthodox religion.These two fundamental elements constituted the connecting link with Greece; finally, Corfu and the other six Ionian islands were united with Greece in 1864. The arts and literature have flourished in Corfu since the 18th century. Being part of the Republic of Venice, Corfu got soon in touch with the European Renaissance. In the 19th century, the first theatre in Greece, the “San Giacomo”, opened here and many operas were performed there; that is how the Corfiots got an ear for music. During this century, the first University of Greece, the Ionian Academy was established. So were the Philharmonic Society, the Arts School and the Reading Society of Corfu, the oldest intellectual institution of modern Greece. Great painters, writers and musicians were born and raised in Corfu. Ioannis Kapodistrias, one of the most eminent European politicians of modern history, the first Governor of independent Greece was born here. 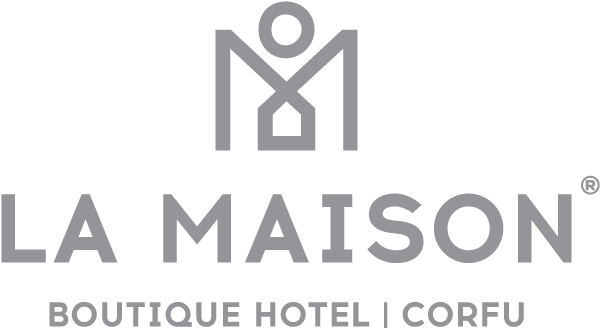